FNF vs John Doe (Roblox) is one of the most popular FNF Mod based on the Friday Night Funkin game. This John Doe (Roblox) FNF Mod is a little bit difficult so you can play it on Easy mode. In This FNF John Doe (Roblox) Mod, Boyfriend found himself battling on the Roblox server and John Doe appeared before him, which was last seen in 2017. John Doe is an official test account created by Roblox creator and used by the administrators as NPCs. Will Boyfriend be able to defeat this mysterious Roblox account somewhere in the matrix-like internet universe?. You might also like FNF vs Walter White and FNF Unknown Suffering but Everyone Sings it

You can use WASD or Arrow Keys to play FNF John Doe (Roblox) Online Mod on your Computer. You have to press the keys as notes reach the judgment line. You can Start or Pause the John Doe (Roblox) Mod using the Enter key. 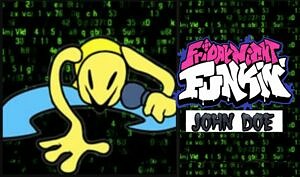 FNF Unknown Suffering but Everyone Sings it

Tails get Scared but is a FNF Mod

Every Copy of FNF is Personalized (But It’s a Mod)

FNF vs Speed vs Ben (Confronting Yourself)

FNF phantasm but everyone sings it

Every Copy of FNF is Personalized (But It’s a Mod)

FNF Unknown Suffering but Everyone Sings it