Brutal.io is really addictive multiplayer game with rather good gameplay and a nice idea – you might know that this game was developed by the creators of the legendary wings io game. Here, you primary mission is to survive and grow bigger. You control a car with a flail. Use the flail to kill other players and eat their dead parts to grow. As you progress in the game, your trail is becoming bigger and bigger, so other players won’t be able to kill you easily. Join the server of Brutal io and enjoy the game with thousands of people all around the world. You can play Brutal io Unblocked also from our site. You can also play Mope.io and Wings.io

You can use WASD or Arrow Keys to play Brutal io games on your Computer. Press Left click to detach flail and Hold the left click to attach flail.

Brutal.io game is developed by Andre Almeida, the same guy who developed Wings.io online game for you. 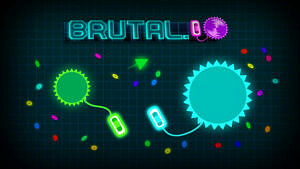