Superspin.io is a multiplayer fidget spinner game that combines elements of Agar.io and Spinz.io. Before starting the match, you can freely customize your fidget spinner’s appearance, from its neon color to the badge.

Glowing gems are the most important things in this game. By collecting them, you can steadily increase your spinning speed and size! Bump into other slower players to kill them and collect their gems, but watch out for players that are faster than you because they can take your gems and even kill you if the difference is huge. Boost your speed to chase other players and escape faster; it uses your current speed, so pay attention to it. Go slow at first and slowly collect gems to build your speed. Avoid unnecessary fights until you are fast enough, then it’s show time!

Use your mouse to control the movement

Press the left mouse button to boost the speed

You can use WASD or Arrow Keys to play Superspin io games on your Computer. You have to press the keys as notes reach the judgment line. You can Start or Pause the superspin io games using Enter key. 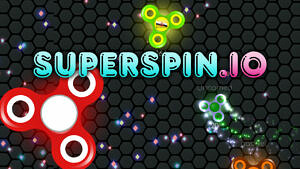