FNF vs Updike V2 is one of the most popular FNF Mod based on the Friday Night Funkin game. This Updike V2 FNF Mod is a little bit difficult so you can play it on Easy mode. In This FNF Updike V2 Mod, Gabriel Updike return in a new remastered FNF mod complete with a rewritten story and updated designs singing to a new remix of Remorse. Updike got a lot bigger and more muscular, maybe he been working out and getting a lot of food. Updike was a secret Whitty character from the original Whitty Mod. You might also like FNF vs The Nicky-Verse and FNF vs Eminem Bowel Brawl

You can use WASD or Arrow Keys to play FNF Updike V2 Online Mod on your Computer. You have to press the keys as notes reach the judgment line. You can Start or Pause the Updike V2 Mod using the Enter key. 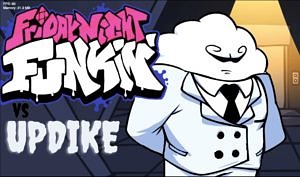 FNF vs One Hit Wonders vs zzzzzzzz.png

FNF vs One Hit Wonders vs zzzzzzzz.png

FNF ToyBoy But Everyone Sings it

Guys Look is a Birdie Take 2, but is a FNF Mod