Build Royale io unblocked brings you back to the famous Battle Royale genre! You need to build and survive among rivals who want to kill you. To survive in BuildRoyale.io, find a weapon on the map with which you can protect yourself. Then collect the resources to build your shelter.

Resources are extracted in the usual way, you need to cut down trees and demolish stones with a pick. When you see that there is a necessary amount of building materials in the warehouse, you can build a protective zone. By pressing the Q button, you automatically switch to construction mode.

BuildRoyale.io is a .io game created by GoalieSave25, who is also the developer of Shootem.io. BuildRoyale io is a compilation of classic battle royale shooters with mining & crafting options. So you can do both mines & build some defense structures and fight with other players.

Similar to other popular Fortnite.io games such as Surviv.io and ZombsRoyale.io, BuildRoyale.io is a fast-paced laststanding Battle Royale game in 2D. You can even build with raw materials like Wood.

There are different ways you can win a game of BuildRoyale.io. Such as being an aggressive player who hunt down others before they have good weapons. Being a wise player and only fight when it is needed, or fight wit hthe aid of buildings.

You can use WASD or Arrow Keys many other key to play Build Royale io online on your computer. You have to press the keys as notes reach the judgment line. You can Start or Pause the Buildroyale.io using Enter key.

Become the last player standing in the game to win. Each match lasts for a few minutes, make good use of weapons, buildings and materials on the ground. 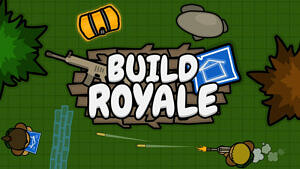